Skip to content
December 19, 2019
Plug-in rotameters are the most commonly used flowmeters in industry and laboratories. It has a simple structure, intuitive, small pressure loss, easy maintenance and so on. The rotameter is suitable for measuring small flow through the pipe diameter D<150mm, and can also measure the flow of corrosive media. When used, the flow meter must be installed on a pipe section that runs vertically and the fluid medium flows through the rotameter from bottom to top.
One, plug-in rotor flowmeter measurement error:
1. Due to the great influence of temperature and pressure on the gaseous medium, it is recommended to use warm and pressure compensation to obtain real flow.
2. The larger change in the density of the liquid medium is also a cause of the larger error. Since the instrument is calibrated according to the density given by the user before the calibration, the flow rate of the water in the calibration state is calibrated. Therefore, if the medium density changes greatly, it will cause great errors in the measurement. The solution can bring the changed media density into the formula and convert it into the error correction factor. Then, the flow rate measured by the flow meter is multiplied by the coefficient to change the real flow rate.
3, installation does not meet the requirements: for the vertical installation of the rotor flowmeter to maintain vertical, tilt angle of not more than 20 degrees; for the installation of the rotor flowmeter to maintain the level, the inclination is not more than 20 degrees; 100mm space around the rotor flowmeter must not have ferromagnetic objects . The installation location should be far away from the valve changing port, pump outlet, process pipeline turning and so on. To maintain the requirements of the 250mm straight section after the first 5D.
4, due to long-term use and pipeline vibration and many other factors caused by floater flowmeter sensing magnetic steel, pointers, counterweights, rotating magnetic steel and other moving parts loose, resulting in larger errors. Solution: You can verify by first pushing the pointer by hand. First, press the pointer in the RP position to see if the output is 4mA, and if the flow rate is 0%, verify by the scale. If no match is found, the part can be repositioned. Generally require professionals to adjust, otherwise it will cause loss of position, need to return to the manufacturer for correction.
Second, plug-in rotor flowmeter pointer jitter:
1. Severe pointer jitter: mainly due to medium pulsation, air pressure instability, or pressure, temperature, and flow rate given by the user in the gas operation state, which is inconsistent with the actual state of the rotor flowmeter, and there is a large difference in the rotor flowmeter overshoot.
2, moderate pointer jitter: generally caused by the state of the media flow. For the gas is generally caused by the media operating pressure instability. Regulators or steady flow devices can be used to overcome or increase the rotor flow metering damping.
3, slight pointer jitter: generally caused due to medium fluctuations. It can be overcome by adding damping.
Third, the plug-in rotor flowmeter pointer stops at a certain position:
The main reason for this is that the rotor of the rotameter is stuck. Generally, when the rotameter is used, the valve is opened too quickly, so that the rotor quickly impacts the stopper upwards, causing the stopper to deform and the rotor to become stuck. However, it is not ruled out that the rotor is stuck because of misalignment between the rotor guide rod and the stop ring. The instrument can be removed when processing, the deformed stopper can be removed and shaped, and check with the guide rod is concentric, such as different hearts can be corrected, and then the rotor is installed, push the rotor, feel the rotor up and down unobstructed card that is In addition, when the rotameter is installed, it must be installed vertically or horizontally, and it cannot be tilted, otherwise it will easily cause the card table and bring errors to the measurement.
Plug-in rotameter debug commissioning debugging failure is expected to appear in the instrument installation and commissioning stage, once removed, in the future under the same conditions will not appear again. Common faults during commissioning are generally caused by improper installation, environmental disturbances, and fluid characteristics. The output signal will also fluctuate to some extent. When two or more liquids are used as a pipe mixing process, if the conductivity of the two liquids (or their respective potentials with respect to the electrodes) is different, the flow sensor will enter the flow measurement before the mixing is not uniform, and the output signal will also fluctuate. The sensor can be mounted both horizontally and vertically, but it should be ensured that the effects of deposits and air bubbles on the measuring electrode are avoided and the electrode axis is kept at a good level. When mounted vertically, the fluid should flow from bottom to top. The sensor can not be installed in the highest position of the pipe, this position is easy to accumulate air bubbles. 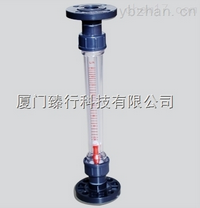