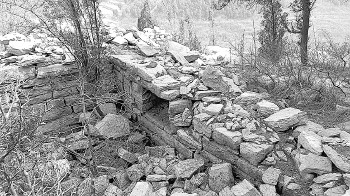 Wang Chuanyou saw the relics of Wang Chuanyouâ€™s fortune during the Battle of Jinan in the hillside of Jinping Mountain from a hill on the northeastern foot of Jinping Mountain. These relics resemble circular fortresses, about two meters in diameter but only half a meter high. One of the "fortress" can also see a window similar to the "shot port". Ten meters away from the fortress, there is a dwarf wall as a perimeter defense barrier. Wang Chuanyou said that he found five relics on Jinping Mountain, roughly the same situation.

Two and a half hours later, the reporter and Wang Chuanyou came to another hill - Huilongshan. There is a more complete fortification here. The entire hilltop fortification covers an area of â€‹â€‹three or four hundred square meters and can roughly see the trenches, bunkers and living areas. There is a one-metre-wide passage between each area. However, the relics here have also been seriously damaged. "These relics may have been vandalized before and after 1959. In the past two years, when some people went up the hill to plant trees, they directly surrounded the bunker stones around the trees, and some built small houses on the original site." Wang Chuanyou said helplessly.

This is the relics of the Battle of Jinan?

Wang Chuanyou said that he had seen these fortifications when he was seven or eight years old and his brother went uphill to go cattle. There are 4 relics on the Tiger Mountain, not far from it, and 1 on the Yanchi Mountain. Farther away, there are Pingdingshan and Xiaowohushan.

Wang Chuanyou worked in the property department of a unit. After completing the night shift, he often gave up during the day break and went to the mountain to investigate. He also consulted a lot of information and wrote down more than a hundred thousand words. In the end, he came to the conclusion that "the fortifications on these mountains are all traces of the Battle of Jinan."

Experts: These sites are of different statuses

Whether the fortifications on Huilongshan and Jinpingshan were left behind in the Battle of Jinan? Jin Junâ€™s battle research expert Wang Jun introduced that at the time, the Kuomintang defense area in the Battle of Jinan was to the north of the mouth, to the south of Bali, to the east, to the Yanzi Mountain, and to the Yanchi. Mountains, Mianchi Mountain, Maoling Mountain area did not extend to the area of â€‹â€‹Longdong Jinping Mountain. Wang Jun showed reporters a map named â€œThe Jinan Campaign Wanted.â€ It records the offensive route of the Peopleâ€™s Liberation Army when it liberated Jinan City. On the map, the reporter did find that the Longdong area was not the venue of the exchange of fire between the KMT and the CCP.

Wang Jun believes that: â€œHuilongshan may be found to be a fortification left over from the Jinan campaign. However, the fortifications at Jinping Mountain in Longdong should not be remnants of the Jinan campaign, and may be remnants of the War of Resistance against Japan. In addition, there may be In the Republic of China, Han Fuxuan built military fortifications. At that time, Han Fuxi had built a villa in Longdong and the old site of the swimming pool was still found today."

Many parties stated that these monuments should be protected

In the afternoon of the same day, a staff member of the Cultural Relics Bureau of Jinan City stated that it was not clear to Wang Chuanyouâ€™s situation and it was necessary to draw conclusions after investigation.

Little friends, rushing to pay attention to the gold bar Internet cafes, take you to explore the latest and most complete information in the industry, let us explore further!

Horizaontal Glass Washing And Drying Machine is used for cleaning and air-drying of flat glass panes. There are various types available for different glass, float, coating and low-e glass with thickness 3-25mm and to width up to 3250mm. Washing and drying sections can be elevated or lowered as a whole with digital display. Order can be customized. Water heating is as optional.