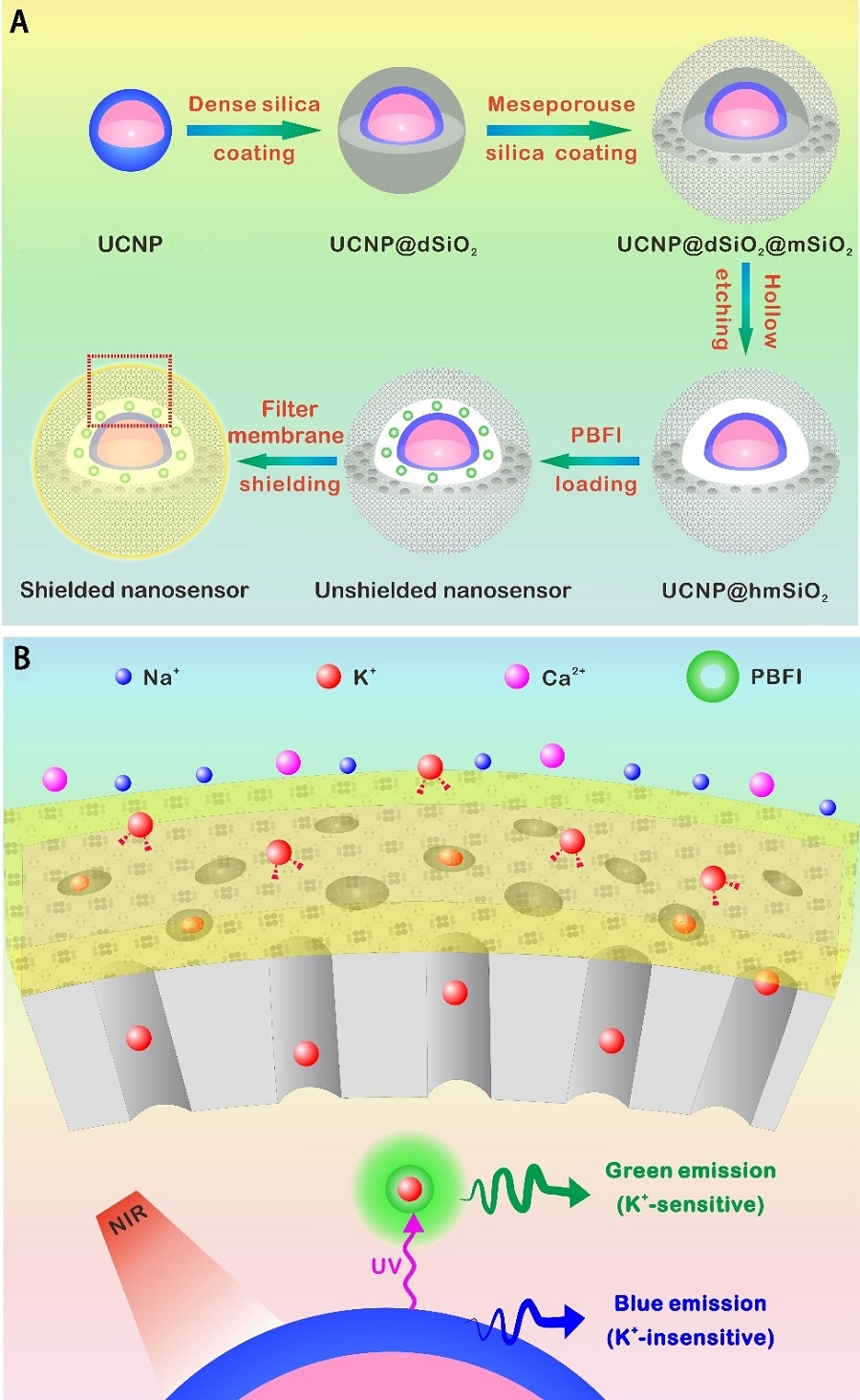 The change of extracellular potassium ion concentration directly reflects the change of neuronal electrical activity, which in turn affects the excitability of neurons and synaptic transmission between neurons. Therefore, the change of potassium ion concentration can reflect the abnormality of nerve activity from another side, and potassium ion imaging has become a new method to study the function and abnormality of nervous system. Among many monitoring methods, fluorescence imaging has a unique advantage. It can non-invasively obtain spatio-temporal information on the dynamic changes of extracellular ion concentration, thereby revealing the interaction between brain neurons at multiple scales. However, existing potassium ion probes can only be excited by ultraviolet or visible light, and because they are easily absorbed and scattered in living tissue, they can only be applied to the superficial layer of the brain. In addition, the existing potassium ion probes have poor anti-interference and low selection, and it is particularly difficult to distinguish sodium and potassium ions, and it is impossible to achieve specific monitoring for potassium ions. Therefore, there is an urgent need to develop new potassium ion fluorescent probes, which must have higher penetration depth near-infrared light excitation and have a specific response to potassium ions.
To this end, researchers have carefully designed and prepared spherical nanoprobes with a three-layer (upconverting luminescent nanoparticles @ potassium ion sensing probe @ potassium ion selective film) core-shell structure, with a total diameter of about 85 nm. The up-converting luminescent nanoparticles in the inner core can convert near-infrared light into visible light, which just happens to be the excitation light of the intermediate layer potassium ion fluorescent probe. The 2 nm thick film on the outer layer only allows potassium ions to enter and exit the nanoprobe, greatly improving the anti-interference performance of the probe against other cations in the body (such as sodium ions, calcium ions, etc.), so this film gives the probe a very high Potassium ion selectivity.
To further verify the practicality of the above-mentioned new potassium ion nanoprobe, the researchers used this nanoprobe to detect the dynamic changes of potassium ion concentration in the brain in mouse migraine model and zebrafish epilepsy model. Cortical diffusion inhibition is considered to be the cause of migraine. In addition to the spread of large-scale neuronal discharge activity in the cortex, previous work also found that there was a strong change in potassium ion concentration during this process. Because the preparation of ion selective electrodes is difficult and signals can only be collected at very few locations at the same time, the temporal and spatial law of potassium ion concentration changes is not clear. The researchers applied the newly developed highly sensitive and specific potassium ion probe to observe the phenomenon that potassium ion concentration changes propagate in the form of plane waves under the excitation of near-infrared light, which provides new techniques for further understanding the mechanism of cortical diffusivity inhibition.
In the field of epilepsy research, there is a view that the increase in the concentration of extracellular potassium ions is not only the result of intense neuronal discharge, but also one of the causes of seizures and transmission. However, due to the lack of sensitive and specific probes, this view has been difficult to verify. On the zebrafish model of epilepsy, the researchers simultaneously recorded neuronal activity and potassium ion concentration changes through two-color imaging, and found that in brain regions without epilepsy-type intense neural activity, potassium ion concentration can also be observed to support potassium ion diffusion The role in the onset and spread of large-scale neural activity.
The research work also provides new ideas for designing other ion-specific probes excited by near-infrared light, and opens up a new method for real-time dynamic monitoring of the ion activity in neurons.
The work was completed by Du Jiulin postdoctoral fellow Liu Jianan, associate researcher Shang Chunfeng and Shanghai Silicate Research Assistant Pan Limin under the joint guidance of Du Jiulin, Xiong Zhiqi, Shi Jianlin and Bu Wenbo. Lu Bin, Wu Rongjie of the Xiong Zhiqi research group, Feng Yun of the Pu Muming research group, and Chen Weiyu, Zhang Rongwei, and Bu Jiwen of the Du Jiulin research group also made important contributions. This work was supported by the China Association for Science and Technology, the National Natural Science Foundation of China, the Ministry of Science and Technology, the Chinese Academy of Sciences and Shanghai.