Skip to content
April 20, 2020
[ Instrument R & D ] As a new type of solution-processable ionic semiconductor material, metal halide perovskite has become a hot spot in the field of optoelectronic research in recent years due to its advantages of adjustable band gap, high defect tolerance and simple preparation. material. However, the metal halide perovskite material with a similar spatial structure as the lithium ion conductor lithium lanthanum titanate (Li3xLa2 / 3-xTiO3) has little research on the lithium ion conduction characteristics and related applications in the framework. 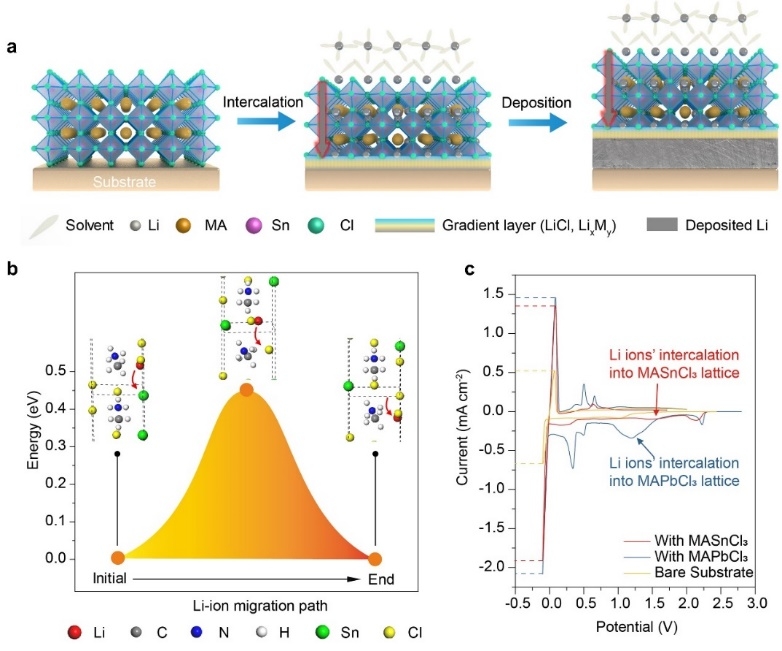 Lithium-ion battery is a kind of secondary battery (rechargeable battery), which mainly relies on the movement of lithium ions between the positive electrode and the negative electrode to work. In the process of charging and discharging, Li + intercalates and deintercalates between the two electrodes: when charging, Li + deintercalates from the positive electrode, intercalates into the negative electrode through the electrolyte, and the negative electrode is in a lithium-rich state; the opposite is true during discharge.
On October 9, 2019, the Swedish Academy of Sciences announced that the 2019 Nobel Prize in Chemistry will be awarded to John Goodenough, Stanley Whitingham and Yoshino Akira in recognition of their contributions in the field of lithium-ion battery research and development.
Recently, the team of Yao Hongbin of the School of Chemistry and Materials Science and Technology of the University of Science and Technology of China and the associate researcher Zhang Guozhen and Ph Huan Nanjing Surface Analysis Laboratory Ph.D. Ju Huanxin collaborated on the construction of a metal halide perovskite lithium conductive layer and used to stabilize lithium metal batteries Made progress. The team of Yao Hongbin made full use of the advantages of the wide band gap of chlorine-based metal halide perovskite, good film formation, and simple preparation, etc., developed a gradient lithium conductive layer based on metal halide perovskite, and realized the metal lithium anode and electrolyte. Isolation greatly improves the cycle stability of lithium metal batteries.
The researchers found that the metal chloride-based perovskites (MASnCl3 and MAPbCl3) prepared by spin-coating have the property of containing and transporting lithium ions. Theoretical simulation calculations show that the migration energy barrier of lithium ions in the lattice of metal halide perovskite MASnCl3 along the [001] direction is 0.45 eV, which is in line with known lithium ion conductors such as Li4GeS4 (0.53 eV) and Î³- Li3PS4 (0.49 eV) is equivalent. According to the simulation results, with the torsion of the methylamine ion [CH3NH3]-, the shuttle behavior of lithium ions in the perovskite lattice follows the four sides between [SnCl6] 4-octahedron and methylamine ion [CH3NH3]- Body cavity. Through cyclic voltammetry and deep XPS analysis, the researchers found that lithium ions can be inserted into the crystal lattice of the metal halide perovskite and can reversibly alloy / dealloy the perovskite / substrate interface. A Li-Sn alloy layer with a thickness of about 300 nm is formed at the bottom, forming a unique gradient structure of perovskite-alloy layer. The Li-Sn alloy layer has a high lithium ion migration coefficient (~ 10-4 cm2 s-1). At the same time, the generated by-product LiCl has excellent electrical insulation properties and can protect the upper perovskite structure from damage. . This unique gradient structure of perovskite-alloy layer is conducive to the uniform deposition / extraction of lithium ions on the electrode.
Further, the researchers have developed a convenient solid-phase transfer method, which transfers high-quality chlorinated perovskites (MASnCl3 and MAPbCl3) films prepared by spin coating to the surface of the lithium foil in situ to form a lithium conductive structure with a gradient structure Floor. The metal halide perovskite lithium conductive layer can improve the interface problem between the electrolyte and lithium metal, realize dense lithium metal deposition and extraction, and avoid the growth of lithium dendrites and the powdering of lithium metal electrodes. The final electrochemical cycle test of the lithium metal full cell showed that, under the protection of the metal halide perovskite lithium conductive layer, even in the lithium-depleted (50 Î¼m) and limited electrolyte (20 Î¼l mAh-1) and 2.8 mAh cm- Under the strict conditions of 2-sided capacity, the capacity remains above 80% after 100 cycles, while the capacity of a lithium metal battery without a protective layer has been reduced to 40% after 50 cycles.
Electrolyte is a term with a wide meaning, and its content used in different industries varies greatly. There are electrolytes (also called electrolytes) in living organisms, electrolytes used in the battery industry, and electrolytic capacitors and supercapacitors.
The composition of electrolytes used in different industries differs greatly, or even completely different.
For example, the electrolyte of the human body is mainly composed of water and sodium chloride, PH buffer substances, etc., the electrolyte of the aluminum electrolytic capacitor contains the main solvent such as GBL, the electrolyte of the super capacitor contains the main solvent of propylene carbonate or acetonitrile, and the electrolysis of the lithium manganese primary battery The liquid contains main solvents such as propylene carbonate, ethylene glycol dimethyl ether, and the electrolyte for lithium ion batteries contains main solvents such as ethylene carbonate, dimethyl carbonate, ethyl methyl carbonate, and diethyl carbonate. Their respective conductive salts It is also completely different, such as sodium chloride in the human body, tetraethylammonium tetrafluoroborate in the supercapacitor electrolyte, lithium perchlorate or lithium trifluoromethanesulfonate commonly used in lithium manganese primary batteries, and the Lithium hexafluorophosphate.
This work is the first attempt to apply the metal halide perovskite material to the lithium conductive layer at the lithium metal anode interface, and gives strong evidence for the high lithium ion conductivity of the metal halide perovskite material. The reviewers commented: This work is the first report of using metal halide perovskite as the protective layer of lithium metal anode. The metal halide-rich structure and stable frame will provide more feasible ideas for new solid electrolyte design and high-performance lithium metal battery construction.
Source: Encyclopedia, University of Science and Technology of China