Skip to content
April 21, 2020
[ Instrument R & D ] As a representative material of a new generation of thin-film solar cells, the toxicity of perovskite and its sensitivity to water and oxygen have seriously hindered its commercialization. In recent years, two-dimensional (2D) Sn-based lead-free perovskite has become an alternative material for 3D perovskite due to its excellent stability and low toxicity. However, due to the particularity of the two-dimensional material structure, electrons or holes are limited by the quantum size effect, and their lifetime and mobility are much lower than that of the 3D structure, so their device photoelectric conversion efficiency is significantly lower than that of 3D perovskite. This contradiction between stability and high efficiency has become a difficult problem in practical applications. 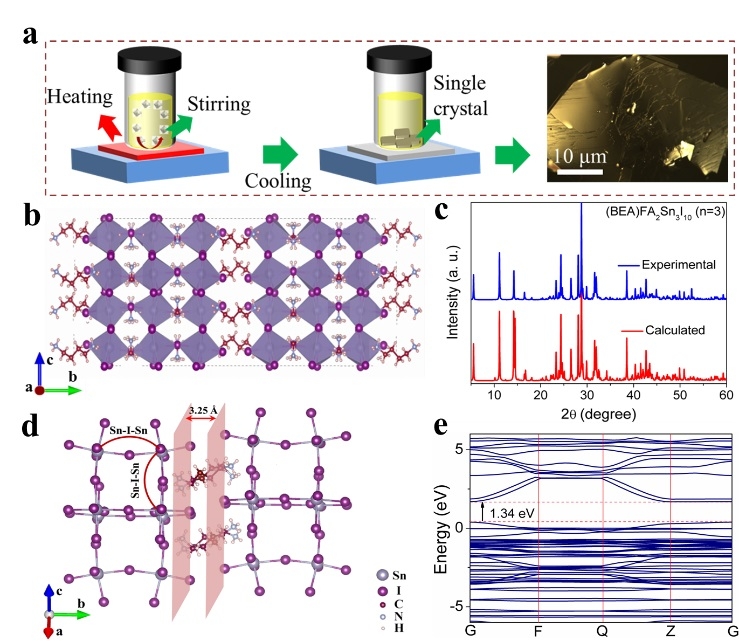 Recently, with the support of the National Natural Science Foundation of China, the Ministry of Science and Technology and the Chinese Academy of Sciences, researchers from the Key Laboratory of Green Printing, Institute of Chemistry, Chinese Academy of Sciences and Zhengzhou University have successfully introduced the hydrophobic organic molecule 1,4-butanediamine into In Sn-based lead-free perovskites, a series of quasi-two-dimensional perovskites with Dion-Jacobson phase were synthesized. The (BEA) FA2Sn3I10 perovskite structure with a typical quasi-two-dimensional structure has good symmetry, the light absorption window is not significantly reduced compared with the three-dimensional structure, and has a suitable forbidden band width.
First-principles calculations show that (BEA) FA2Sn3I10 has a large formation energy (106 j / mol) and a stable structure. In addition, the (BEA) FA2Sn3I10 film has good compactness and the carrier confinement effect is not obvious. Combining the one-dimensional diffusion equation, the calculated electron diffusion length is 450 nm, the hole diffusion length is 360 nm, and the carrier mobility It is 14.4 cm2 V-1 S-1. The solar cell prepared by using this (BEA) FA2Sn3I10 thin film has a photoelectric conversion efficiency as high as 6.34%. More importantly, under natural conditions, after 1000 hours of aging for unpackaged devices, the efficiency only declines by 8%.
In addition, in the light stability test, it was found that after 200 hours, the device efficiency was still more than 90%. Through this new low-dimensional lead-free perovskite structure design, high efficiency and stability of perovskite solar cells are achieved at the same time, which is of great significance for promoting the practical application of perovskite solar cells.