Skip to content
April 20, 2020
[ Instrument R & D of Instrument Network ] The determination of cell fate is a basic issue in developmental biology. Although the cell fate in plants is highly flexible, it is also highly dependent on the cell lineage: the state the cell has experienced determines the current state and future developmental potential. Jiao Yuling's research group at the Institute of Genetics and Developmental Biology, Chinese Academy of Sciences has long studied the formation of plant lateral meristems. Lateral meristems are located in the leaf axils of higher plants, and can form new growth points. They have similar organogenesis as the top meristems. Where do the stem cells that form lateral meristems come from? The preliminary work of the research team found that the axillary stem cells have maintained a cluster of incompletely differentiated stem cells, which are precursor cells of lateral meristematic tissue. This stem cell lineage continues to express the meristem marker gene STM. How is this stem cell lineage maintained? The study started with forward genetic screening of mutants. After a series of molecular genetic analysis, it was found that the self-activation of the STM gene is the key to maintaining the stem cell lineage. 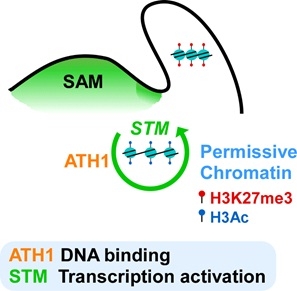 The research team of Jiao Yuling obtained a mutant with obvious defects in lateral bud initiation through a large number of mutants. The leaf axillary could not maintain normal STM expression, and the cells in the leaf axillary gradually differentiated. Therefore, the ATH1 gene leading to phenotype in this mutant is a key gene for maintaining STM expression and dedifferentiated cell status.
The transcription factor encoded by the ATH1 gene interacts with the transcription factor encoded by the STM. A series of molecular biochemical experiments showed that ATH1 can directly bind to the STM gene locus, and the activation of STM gene by ATH1 significantly depends on the STM protein itself. Based on the above results, an STM self-activating regulatory circuit dependent on ATH1 protein was obtained. In STM self-activation regulation, ATH1 protein has DNA binding effect, STM protein has transcription activation effect, ATH1-STM realizes STM self-activation regulation in the form of complex. Further research found that the expression of STM maintains the chromatin of the STM site in an open state, so that the expression of STM can be further activated during subsequent development, thereby forming lateral meristems.
This study reveals and explains in detail a regulatory circuit that maintains the stem cell lineage through the self-activation of key genes, and has a good reference for the study of the mechanism of meristem maintenance in animals and plants. At the same time, the study of lateral meristematic activity also has theoretical guiding significance for the increase of crop yield.
The result was officially published in Current Biology magazine on April 2 and the article title is A self-activation loop maintains meristematic cell fate for branching. Dr. Cao Xiuwei, a doctoral graduate of Jiao Yuling research group, was the first author of the paper, and Jiao Yuling was the corresponding author of the paper. Wang Wei, Xiong Yuanyuan, Yang Haibian, Yang Minglei, Ye Peiyi, and the Sablinowski team of John Innes Center in the United Kingdom also participated in this research. . The research was supported by the National Natural Science Foundation of China, the Chinese Academy of Sciences Key Frontier Science Research Project, the Chinese Academy of Sciences Strategic Research Project, the Royal Society Newton Senior Scholars Project and the Chinese Academy of Sciences-John Innes Center for Plant Microbiology Science Excellence Project.